A three day adventure to mark the start of our nine days of backpacking (3x three-day trips) through Strathcona Park.  This trip would take us all over Strathcona, experiencing a wide variety of terrain and sights, hitting a few of the easy highlights in the park!  Stay tuned!

Trailhead to Ridgeline (Elev. 1470m)
We rose early and hit the trail at 6:20am, the morning air still chilly in the shaded parking lot. The trail to King's Peak rose swiftly away from the river, and soon passed under the power lines. The power line access area can be used as an alternate starting point, shortening the hike by about 20 minutes or so each way. After a quick picture with the trailhead sign, we continued up towards the mountain.

Blueberry bushes dotted the sides of the trail and the bitter, nearly-ready fruits provided a nice snack as we pushed on. After crossing a bridge over the creek (a small unnamed creek flowing from the King's Peak snowmelt), the trail dove deep into the cool trees. Slowly climbing switchback after switchback, we were finally treated to a view of the valley disappearing from underneath at 625m of elevation. The crisp morning gave wonderful blue sky views towards Crest and Big Den mountains to our north.

A little after 8:00am we started to hear the sound of rushing water through the trees. A few turns later, we came upon the first waterfall of the day. Turns out, there were many more to follow! We packed down and pulled out the camera, putting on an extra layer as the water spray cut us to the bone. After capturing a few shots, we carried on quickly to escape the frigid mist.

The trail followed the creek for a short time, ascending rapidly in short switchbacks. Climbing up a very rooty "staircase", we finally leveled out and turned a corner to find another creek crossing, sans bridge this time. This gorgeous location contained several more falls - both large and small - so we packed down for a snack and more pictures before picking our way across the rocks to the far side of the creek.

The trail soon led us onto a beautiful glen. With the river burbling off to our right, we picked our way through flowered meadows and up towards the lower gulley. The trail quickly turned loose and sandy as we began the longer steep ascent to get up into the North Bowl.

We arrived at the North Bowl around 10:30am, our pace up the mountain having been very slow and relaxed. At that point, we were faced with a decision: Do we stay in the comfortable but uninspiring bowl, or carry on up to the ridgeline and gamble on finding water and a tarn? We decided to risk it and headed up, knowing that we had lots of time in the day to backtrack if necessary.

Several different trails led southward away from the bowl, but all were well-cairned and converged higher up into a nasty gulley that climbed up to the ridgeline. Full of sand, loose rock, and water-slicked boulders, the gulley was short but left us very ready for lunch as we crested the ridgeline just before noon. A gorgeous vista was our reward for the ugly climb, with views of Mt Colonel Foster, Elkhorn Mountain, and the rest of the Elk River Valley. Turning around, we could see over Buttle Lake all the way to the Juan de Fuca Strait and the mainland coastal mountain ranges beyond.

We spent the afternoon exploring around the ridge and looking for a suitable tarn with a water source, but it was not meant to be. The ridge was bone dry with the exceptions of a few mere trickles of water that dropped from melting snowfields to be gobbled up by the thirsty ground. So, we finally pitched camp near where the trail initially mounted the ridgeline and emptied our bags... it was time to brave the gulley again in search of water.

After carefully negotiating the descent, we quickly found moving water on the lower slopes. Purifying enough water to last for the rest of our trip, we repacked our bags with the now-full water dromedary and bottles and turned back up towards camp. A sweaty climb ensued as we hauled our load of water several hundred meters back up the slope.

Regaining the top of the ridge, we settled down for a nice evening with our old friend: bug spray. Staying in the same area for more than a few minutes had hungry swarms arriving for the feast. We ate dinner and turned in early, the safety of the tent providing far more solace from the buzzing insects than our pocket bug nets. Pulling back the fly, we watched the sun slowly sink below the jagged skyline from the safety of our cozy tent.

We were woken before our alarm by a wicked wind tearing across the ridgeline at around 5:00am. It was coming from the north, and we could hear the wind howling through the trees above us. Despite our tent being hunkered down in a small depression, the wind still shook and pulled at the tent for the next couple of hours. Eventually our alarm went off, though we continued to lounge and delay leaving our literal safety net - the previous day's bugs had not disappeared.

We had a later breakfast and hit the trail around 8:30am, following the same trail we had explored the day before and then carrying on higher. The trail crashed up the ridgeline until we met with a far higher point and it ducked off the west side to provide a smoother ascent. Then, we skirted gulleys with massive drops as we continued upwards til the trail crested the top of the ridgeline once again.

We ducked off the trail to explore the 1900m high point at the end of the ridge, and were pleased to find several viable tarns for camping. Although there was little to no water on site, this would make a gorgeous place to spend the night. Relaxing and taking some time for a snack, we marveled at the ever-improving views of the Elk River Trail below.

After skirting below Queen's Peak (we planned to stop on the way down) we continued upwards, our sights set on the day's goal - the King's Peak summit. The hiker's route zigzagged upwards through gravel and rock, bringing us to the rocky top of the peak only 2 hours after we began our day. We traversed the peak, finding the summit cairn on the high point at the south end.

The view was incredible. To the north, Victoria Peak dominated the skyline. To the east, views of Buttle Lake and the Juan de Fuca Strait were breathtaking. And to the south, we could see the icy blue-green waters of Iceberg Lake nestled at the base of Mt Colonel Foster. Elkhorn Mountain, being immediately south of Kings Peak, stood tall and dominated the view - almost but not quite blocking views of the Golden Hinde.  Finding a nice shady corner just below the summit, we settled down for a rest. We enjoyed the views for hours, drinking in the majesty of the mountains around us... and maybe some whiskey.

After nearly 4 hours on the summit we finally departed, trading our shrinking haven of shade for the hot, shelter-less alpine descent. The climb down took us a quick hour and a half, including a short stop at the top of the smaller Queen's Peak.

We had high hopes that the mosquitoes at camp might have followed some other poor group of hikers down the slopes, but as soon as we stopped beside the tent those hopes were dashed. We found refuge from the sun in the shade provided by the trees next to our camp, but little relief from the incessant buzzing, despite bug spray and head nets.

We woke to the warmth of the rising sun penetrating the tent fly. The stillness of the morning calm was breathtaking after the constant rushing of wind and buzzing of insects that had filled our last day. Rising slowly, we packed our gear in anticipation of our descent back to the parking lot. Breakfast eaten and gear loaded, we layered down for the hike off the ridgeline.

And so the race began... The swarms of mosquitoes that had dogged our footsteps the evening before pounced on us as soon as our rain jackets and bug netting came off. We shouldered our packs and headed quickly down the gulley, pausing only to re-apply a quick spritz of our remaining bug spray (the container had leaked significantly overnight). Less than a half hour later, we found ourselves crossing the North Bowl and breathing a sigh of relief as the creek wind drove the bugs from our backs.

The pace slacked and we sauntered down the mountain, but anticipation of a swim in Buttle Lake after the hike kept us moving steadily. Only a couple of hours later, we found ourselves at the waterfall that had chilled us to the bone just days before. We took a short break, the soft spray from the falls cooling our skin in the late morning heat. Refreshed, we carried on away from the creek, the trail winding down into the forest.

We continued downwards, the corners blending into each other as we forged our path through the trees. As the valley floor closed in on us, the sound of rushing water returned. Just before noon, we rounded a bend to see the bridge by the trailhead waiting for us. Crossing over the water rushing down from King's Peak, we soon passed the trailhead sign and carried onwards! It was smooth sailing for the rest of the forested trail, a gentle descent from the power line track to the parking lot.

Our first trip of three complete, we looked forward to having lakes to swim in during both of our next trips, the only thing that could have made the King's Peak trail more enjoyable. Well, that and if there were no bugs. But hey, welcome to the backcountry!  Stay tuned for part 2 of 3 - our trek to Cream Lake! 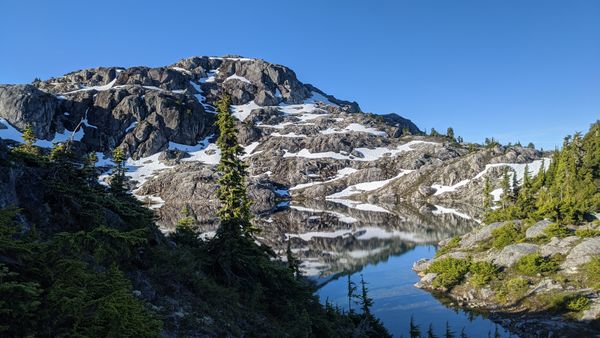 When one of the worst access hikes in Strathcona Park leads to one of the best summit views on Vancouver Island, Mount Myra is a summit to see as a day hike or easy overnighter!