We decided on Crest Mountain as our first overnight backpack of the summer, but with both of our cars out of commission we packed up the bins on our motorcycles instead. We left Victoria on Monday night after Ryan finished work, riding about 4 hours to get up into the Park.

After a long stretch of highway from Victoria to Parksville, we opted to take Hwy 19A, the Old Island Highway, to escape the wind and traffic on the Island Highway. We stopped for gas and a quick dinner at the Flying Canoe in Courtenay, then continued westward towards Campbell River as the sun started to sink in the sky. Turning towards Gold River on Highway 28, dusk slowly settled over the mountains and gave us a gorgeous sunset as we carved our way around empty corners into the mountains.

We had decided to use the King’s Peak trailhead as a base camp for the night, as it is quite close to Crest Mountain trailhead, but further off the main road and much quieter than the larger Elk River trailhead. As we arrived, it appeared that our idea was a popular one; there were several tents already set up in the parking lot for an early strike at the mountain. We set up our tent quickly in the deepening dark, only pausing to swat away the advancing swarms of gnats and mosquitos.

After a decent sleep, we reloaded the bikes and headed to the Crest Mountain trailhead. We stashed our bikes in the trees out of sight and geared up, stepping onto the trail just before 9:30am. The first km or so of the trail was flat and wide, lulling hikers into a false sense of ease. Two well-built bridges were followed by a gentle climb up and over Drum Lake, but the easy trail was quickly replaced by switchbacks that drove us up and away from the highway.

We passed through salal bushes lining the well-booted trail, over twisting roots and rocky knolls. The forested lower slopes of the mountain glimmered with the morning sun beaming through the trees, brightening only as we crossed small open rocky meadows.

As the sounds of the highway slowly faded away, burbling of the nearby creek came to the fore. We soon came upon a bridge fashioned of a huge fallen tree! A waterfall above the bridge came into view as we approached, water foaming as it rushed past, over the rocks below the bridge.

The further we continued, the steeper the grade got as we wound our way up the switchbacks. Meadows and thicker forest were soon replaced by towering trees with an empty floor as the salal bushes faded away. We followed the east bank of the creek for a few more kilometres, before the trail turned away at about 830m of elevation.

The trail changed abruptly as we entered a large gulley at around 1100m. The switchbacks became much tighter and steeper, the trail surface having more loose rock due to the grade and signs of a dry creekbed nearby. Windfall became more common, but was easily avoided or climbed over. We ascended quickly as the trail forged almost directly up the slope, short switchbacks cutting across the face of the gulley. As we rose through 1250m the landscape shifted again as we emerged onto the higher slopes and came out into sub-alpine meadows. The grade of the trail relaxed and large trees became fewer and farther between, allowing for some promising glimpses of partial views across the valley.

The closer we got to the lake where we planned to camp, the more we discovered easily accessible viewpoints showing King’s Peak across the valley. The trail tended to follow dry creek beds, with abundant evidence that the trail could be very damp in the early season.

Just after noon, we finally crested a rise and were rewarded with our first views of the lake!  The small, unnamed alpine lake was sheltered by the rock around it, only slightly stirred by the wind pushing over the top of the ridgeline. What a peaceful, beautiful alpine setting. The calm, glacial blue water sparkled in the sunlight, begging us to go for a dip. First on our agenda though, was lunch.

After eating, we left our packs by the lake and explored the nearby embankments to find a suitable camping site. Crest Mountain has no marked or designated camping sites, but we were able to find a perfect spot with a beautiful view of King’s Peak across the valley. We set up camp and then set our sights on Crest's summit.

From the downhill side of the lake, we hiked to the right on what looked like the most well-used trail. In hindsight, it would have been better to go along the left side of the lake - that is the route we used on our return. The trail from the lake to the summit is not marked, except by a few cairns placed along a couple of meandering trails through the alpine. Typical to alpine route-finding, there were many different trails cutting towards our destination along different parts of the ridgeline. Between the cairns, the slightly visible dirt trails, and some snow fields that we could see old footprints in, we made our way to the radio repeater tower just above the lakes.  Further to the north, we could see the summit itself, marked by a large, very visible cairn. We hiked across meadows and snowfields towards the summit, the quickly increasing wind drying the sweat from our brows as we hiked across the alpine. To Katie’s disappointment, there was no summit register on Crest Mountain, but the views more than made up for it. From the summit, we had clear views of Mt Heber, Idsardi Mountain, Crown Mountain, and Big Den Mountain, and many more peaks scraping the skies to the north and south of us. For an easy day trip, this is definitely a summit to see.

We layered up for the chill wind and settled down to enjoy the summit.  We had our rain jackets, toques, and light gloves, which were sufficient but certainly not all that warm despite the sun beaming down on us.

Along the descent we found a different trail to follow than the one we had climbed; this trail took us back to the opposite side of the lake than where we started. Once we reached the lake, it was easy to follow the shoreline around to the main trail down. For the rest of the afternoon, we made tea, played cribbage, and finally went for that refreshing swim in the lake.

Sunset brought long shadows cutting across the terrain as the ridgeline behind us swallowed the last of the light. But looking across the valley, King's Peak was captured in a clear and beautiful golden hour that left us speechless.

We quickly launched the drone to get a better view of the setting sun, and were rewarded with another gorgeous view of the sun settling just above a bank of cloud off to the west.

We rose slowly as we knew the trip out would be short and we had all day to do it. But the quiet morning calm did not last long - day hikers soon began to arrive, and most came to look out at the viewpoint nearby our campsite. We packed up and shouldered our gear, and turned to descend down the mountain.

With our food eaten and packs light, we made quick time down the slopes. In less than two hours we reached a very busy parking lot - luckily nobody had blocked in our motorcycles where they were hidden in the trees. After repacking our gear onto the bikes we turned and headed eastward, towards the highway and home. 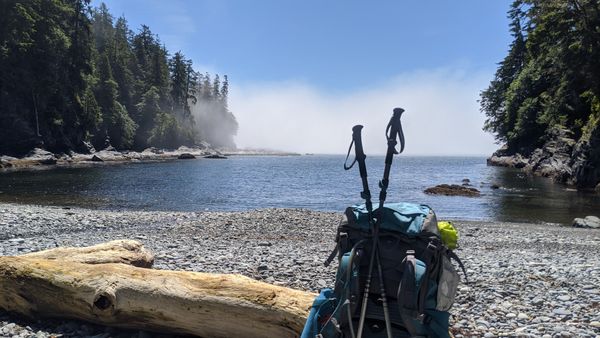 47km of true West Coast wilderness, Juan de Fuca is often described as "West Coast Trail Lite", overshadowed by it's longer brother to the north. But this Island classic has some bite of its own; it may be tougher due to the terrain and lack of easier beach hiking stretches.